skip to main | skip to sidebar

These are pictures from my first trip to Evansville, Indiana. I went to play a concert and give a class at the invitation of the University and stayed with the Ungars. My friend Garnet is not only an exceptional pianist, he and his wife also have an organic cow and sheep farm. These animals were all grass fed, quite friendly, and especially sweet to little Sam, Garnet's 1 year old son. Garnet's wife Gina is the expert on milking these cows and tending the animals. Garnet has become the expert builder, building the milking facility and rebuilding the house by himself.

I saw for the first time how cows are milked. They use a machine, a little octopus-shaped gadget that attaches to the cow and gently collects the milk. The eyes of the cow are exceptionally large up close, and very expressive. The eyes of the sheep have pupils that are horizontal slits, opposite of the eyes of cats. Gina explained to me that despite their gentle appearance, milk cows will fight each other to assert dominance. The biggest cow there was Cinnamon, who was a Swiss milk cow, one of the oldest breeds of cows on earth. She was the leader of this group of cows. In a small pen are their calves, of different ages. The largest one also showed some aggression toward the smaller calves at times. It was also the one who mooed incessantly with one hoof in the empty water feeder to signal to the humans, "Time to refill the water!" The cow dancing with us in the pictures is Leisa, the sweetest cow of all. The animals were fascinated by Sam. They studied him quietly as he fell down and got up over 30 times, trying to walk across the clumps of grass.

It was also fun to listen to the animals speak. They each have distinct voices with different ranges. The group of sheep in the pen just about covered the SATB ranges. All the sheep in the pen made loud demands as soon as we got close. Only one sheep remained silent, number 158, who just looked at us with great meaning in her eyes. Finally she let out a loud Baaaaa in a surprising subcontrabass, which had me doubled over laughing.

There were also all kinds of bugs everywhere, especially at sunset, hundreds of flies and thousands of huge golf-ball-sized mosquito-like bugs that luckily did not bite me. The flat farm terrain made for spectacular sunsets and sunrises. The morning mist was so thick it looked like cotton candy, the really fine kind that I have only seen but never tasted. I also saw soy being harvested for the first time.

Watching the cows eat the grass brought up an old puzzle for me, America's obsession with the lawn. When we moved to the U.S. it was the one puzzling custom for which I never found a satisfying answer. Why does everyone keep a green lawn, water it so that it grows, and then mow it down when it does grow? At first I thought it was an eternal representation of springtime. But then why not plant only flowers instead of all this green grass?

My friends divided their pasture into three or four sections. After the cows feed on one section and mow the grass down, they move the cows to the next section. Meanwhile, the grass in the first section has the chance to grow back. This way, they never run out of fresh grass, and never need a lawn mower. I started to think somehow those little pieces of lawns in our yards must be small representations of this beautiful natural cycle, except the cows are missing from our yards.

This of course makes me think about India, where the holy cow roams free through the city streets eating cardboard and other garbage. There, the green lawn is missing. I wonder if both the roaming cow and the perpetually green lawn somehow represent the same thing? Something kind of important, that we don't have in the cities anymore, the beautiful cycle of nature. Maybe we do everything we can to cultivate those reminders so that we could feel less mutated as a species living in the man-made concrete habitat, living virtual lives with our hundreds of virtual friends. . . 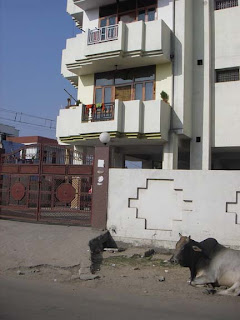 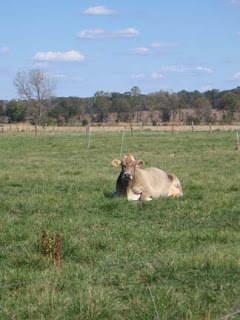 Posted by Hsia-Jung Chang at 6:34 PM No comments: